Just imagine racing each other down two 15 ft (4.5m) slides or jumping in off a (very high) diving platform. These are a couple of the things you are able to enjoy on your cruise to Kealakekua Bay with Fair Wind Cruises. One of the terrific things do on The Big Island for families.

Kealakekua Bay is a remote location accessible via a 45 minute boat trip from Kona. There are a couple of other options for reaching the bay, including swimming in from the car park (on the other side of the bay), hiking in over the hill or hiring a kayak – not particularly family friendly!!

The bay itself is a marine sanctuary and state park and has a name for itself as one of the best snorkelling destinations in Hawaii.

Fair Wind Cruises stated operation all the way back in 1969 and now has three boats all offering a different experience from Kona. We booked a morning snorkelling tour with Fair Wind Cruises to Kealakekua Bay which worked perfectly for us. There is the option of a morning or afternoon cruise to the bay and Fair Wind also offers other tours including a manta ray snorkel. There is no difference between the afternoon or morning cruise, the weather is generally the same and you’ll have the same opportunities for snorkelling.

Fair Wind have thought of everything needed for a great morning out. They have a huge variety of flotation devices on hand for those nervous in the water including custom made ‘view boxes’ which allow you to see underwater without putting your head under the water. We all actually loved the tubes/rings and spent ages floating around chasing each other and playing.

You will need to bring your own towel, bathers, hat and potentially a light jacket. Any footwear is fine as once on the boat you’ll be bare foot. Reef safe sunscreen is also provided – I had no idea that sunscreen is as bad for the reef as it is!

Masks, snorkels and flippers are all provided. Or you can bring your own. Both kids used their Ninja Shark full face mask and put their faces under a little. It’s quite deep where you enter the water off the boat so they both freaked out early on and it was hard to get them settled enough to put their faces back under once we had swam across (Ned kept saying he saw a baby shark, he didn’t! Luckily we had not heard the ‘Baby Shark’ song before this trip or we would have been singing it ha!).

The tour departs Keauhou Bay at 9:00 AM and returns 1:30 PM. The meeting point is very easy to find with Google Maps and there is a car park available. Keauhou Bay is where the Sheraton property is located and you’ll need to leave about 40 minutes drive time from your accommodation in Kona.

The 45 minute cruise out to the bay was smooth and went very quickly. We were spotting dolphins, birds and the crashing waves on the shore. 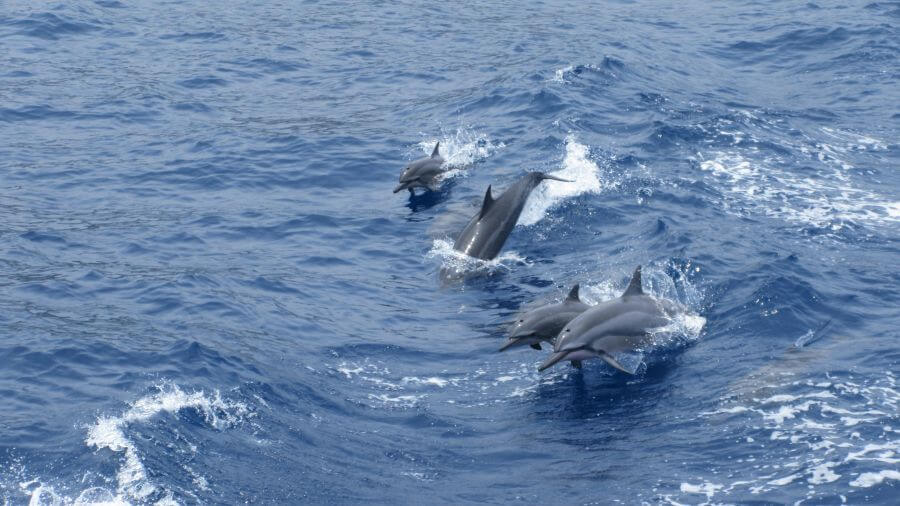 Upon arrival in the bay we were met with quite a few groups of kayakers with a couple of pods of dolphins following them around – very cool!  There were a couple of other tourist boats but Fair Wind has the only mooring on the right hand side of the bay so we felt slightly distant from the crowd. 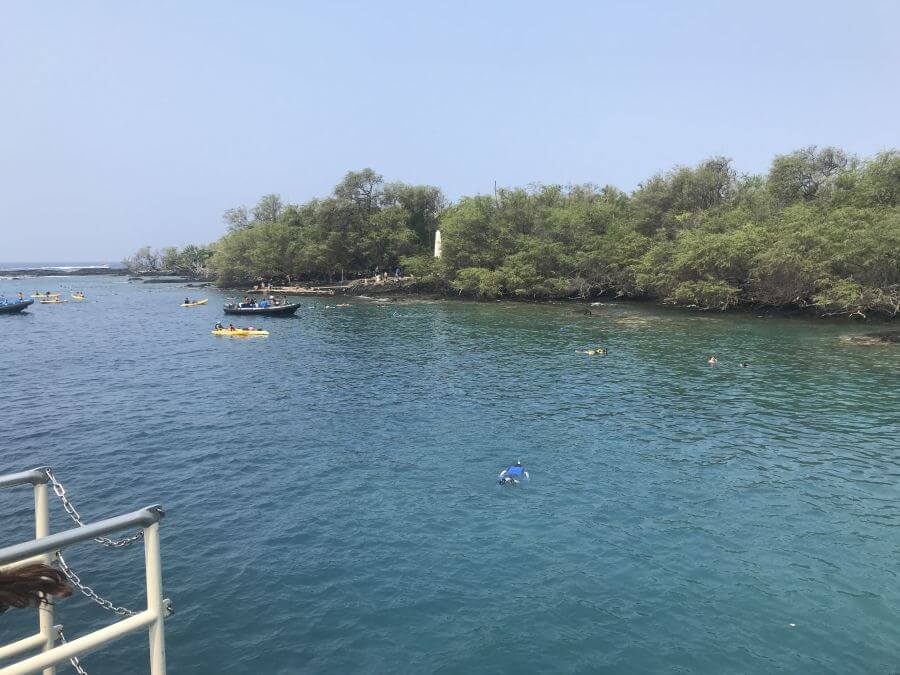 Looking across the bay towards the Captain Cook monument

We then had the next 90 minutes to spend snorkelling, swimming, playing in the water, zipping down the slides and generally having fun in the water!

Ross and I loved racing each other down the slides. You can check it out in the video. The drop was a little big for the kids though!

You can also see Ross jump in off the diving platform. I won’t show you the video of me as I was too scared ha and it didn’t happen!!

Food on our Fair Wind Cruise

The food on the tour was fantastic. Sometimes food can be hit or miss when on tour but they had thought of everything and all the little extra’s were greatly appreciated. Breakfast on the cruise overvto the bay included muffins, egg frittatas, croissants, fresh island fruit, coffee, and juice.

Lunch was served early, after everyone had a chance to snorkel or play in the water. The staff had fun cooking/grilling beef burgers, hot dogs and garden burgers on the deck BBQ at the back of the boat. There were plenty of condiments, homemade pasta salad, fresh island fruit, chips, cookies, soft drinks, and tropical fruit juice.

Cooking up a storm on the back of the boat

A cash bar is open during the last hour of the cruise and little biscuits were passed around which the kids loved.

We booked directly online with Fair Wind as they were offering a 15% discount for direct bookings. The morning cruise can sell out (sometimes 3 days in advance sometimes 2 weeks in advance) so it’s worth thinking about booking early.

This definitely ticks the box of fun things to do on the Big Island of Hawaii.

We had a fun morning, the snorkelling wasn’t the best (a bit deep to start with for the kids and a few little surges of water were enough to put the kids off) but the whole experience was great and it’s definitely a great activity to do with kids on The Big Island. We would highly recommend adding this into your itinerary on The Big Island with kids.

Thanks for the great morning out Fair Wind Cruises.