It probably wasn’t the wisest move deciding to visit Legoland Discovery Centre at Chadstone when we did:

But Ross, Ned and Olive are all massive Lego fans and were beside themselves with excitement.

The Legoland Discovery Centre is within the Chadstone Shopping Centre. The address is:

There are signs when you arrive at Chadstone pointing you in the right direction to the closest carpark – if you don’t see them, then head towards and park at Hoyts as they are in the same area.

We booked our tickets the night before and we did make the comment it probably wasn’t the best idea. Just finding a carpark within Chadstone was a nightmare. We are not shopping lovers so don’t spend much time at the shops unless we have to (and hopefully what we experienced was not normal – otherwise – why would you do that to yourselves ha ha?!).

Arriving at Legoland, we encounted lots and lots of people milling around out the front. We asked a staff member which queue we should be in given we had a confirmation email and she went off and printed our tickets for us so we were able to join the shortest queue.

As with any attraction it’s always a good idea to check the website for opening hours before leaving home. But, as a general rule the opening hours for Legoland Discovery Centre are –

Definitely book your Legoland tickets online before arriving. You’ll need to select an actual time to enter but once inside you can stay as long as you like; although, once you are inside you are not allowed to leave and re-enter.

Tickets start at $32.50 for each family member aged 3+. Adults must be accompanied by a child to enter.

So, what is actually inside? 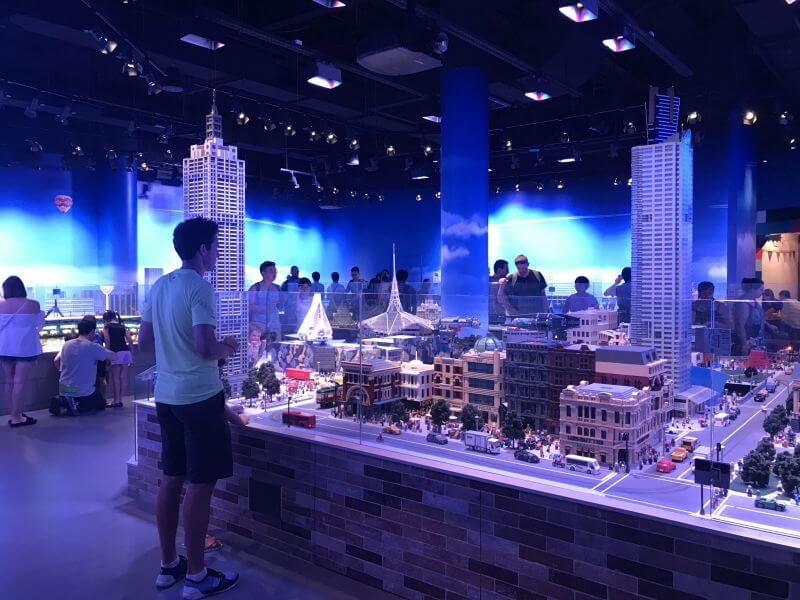 Entering into MiniLand at Legoland

The first thing you come across once you enter is the ‘Factory Tour’ – a room set up with large screens and controls. I have no idea if we somehow walked in part way through but we had absolutely no idea what was going in on in this room! We quickly walked through into the next section.

Next up was the Kingdom Quest Laser ride. The kids were pretty excited to jump on board. There was no queue at all here which was a bonus. You ride in a carriage with 2 in the front and 2 in the back with seatbelts on and aim laser guns at the baddies. This was an interesting one – this was our kids first experience with ‘gun’ type toys – and they had no idea what was happening ha ha! There are skeletons, spiders, bats and trolls to aim at – Olive was freaked out a little and was hiding by curling up into me – there was a troll that was really big!

We then headed in to  Miniland. A mini Melbourne! So cool – made from over 1.5 million bricks. All the landmarks around Melbourne are there from St Kilda, Flemington Racetrack, the Arts Centre and the MCG. 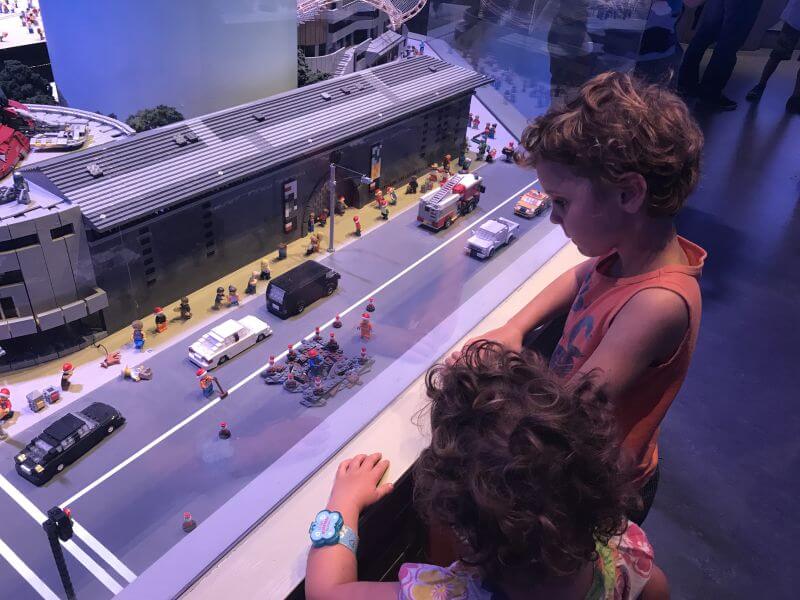 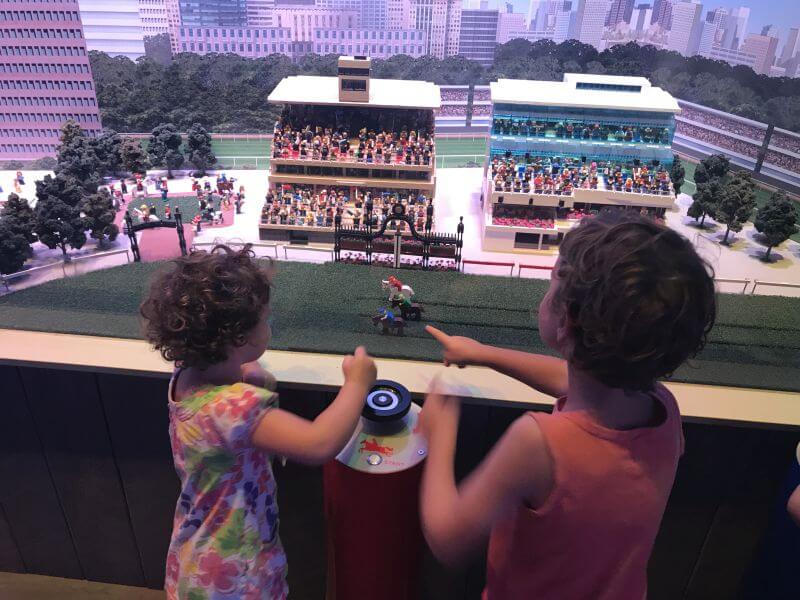 There is a great little pop up tube so the kids can get amongst the action. 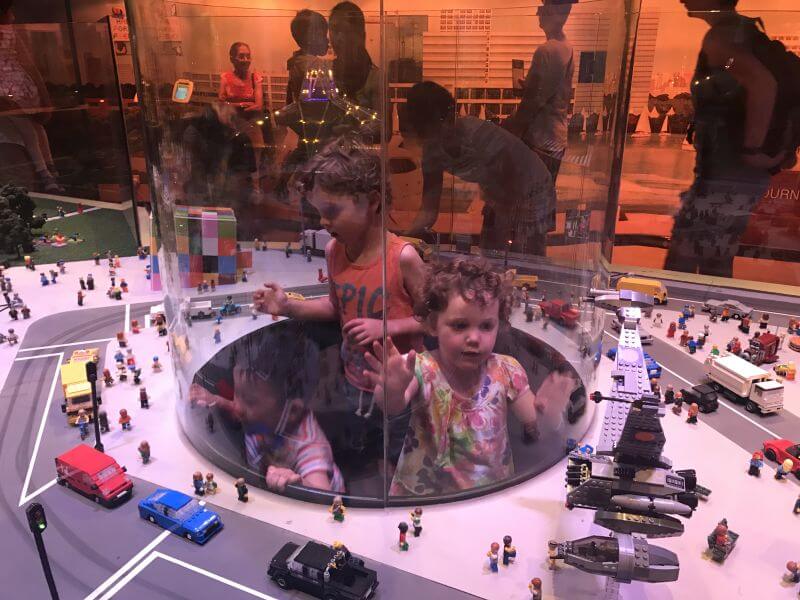 Pop up clear globe to get into the action

During our visit the  Star Wars exhibition was on. I thought it was quite cool seeing lots of Star Wars characters and craft around Melbourne but Ross thought this was a bit rubbish – he didn’t want to see Melbourne with a big spaceships in amongst the Lego!

Next you enter what I would call the ‘main’ area of the Legoland Discovery Centre. Here you’ll find all the other activities on offer. 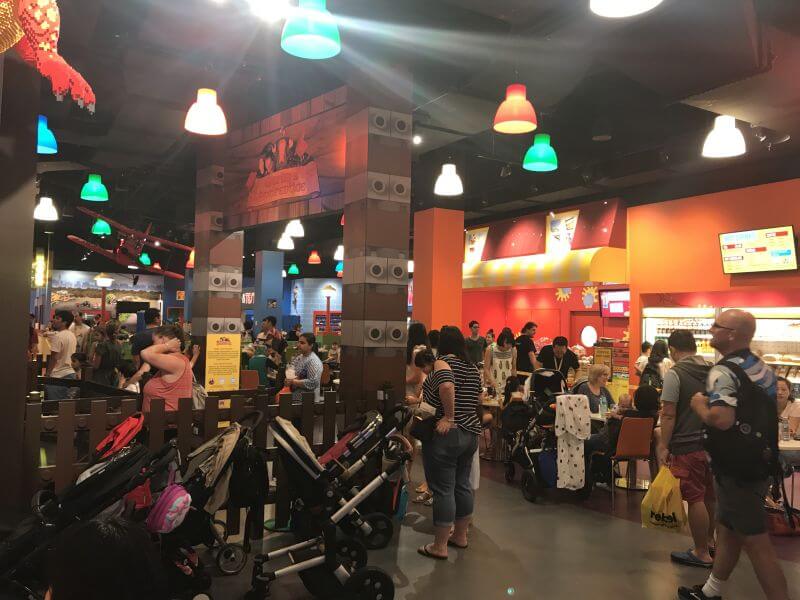 Olive and I spent some time in the Lego Friends area building which she really enjoyed. Next to this is the Lego Farm area – a nice little area for younger kids 2-5 with soft blocks and a small slide (I reckon it’s for the younger end of the age scale). 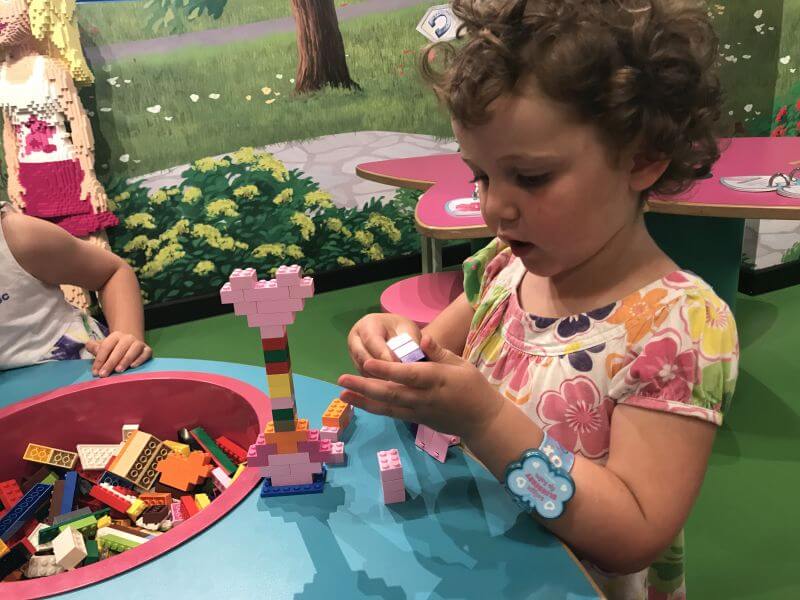 There was a decent queue for the Merlin Apprentice ride but we waited it out. The idea of this ride is to pedal – the faster and harder you pedal the higher you will ‘fly’ – by stopping pedalling you will gently float back down. It was a bit off fun but neither Ned or Olive could reach the pedals. There is a height limit for this ride – children must be a minimum of 90cm to ride.

There are a number of Lego play areas where you can build to your hearts content. Try building your own racing car and then race it down the track or build a tower as high as you can and then test how strong it is against an earthquake on the earthquake table.

The earthquake table was pretty cool but unfortunately, the race car track was just too busy while we were there. We managed to have a turn – in between a million other kids and little kids jumping all over the track.

There are workshops available at certain times to learn how to build individual Lego items but this is suited to slightly older kids.

There is also a great little play area – think a mini indoor play centre. Socks are required for this area and given it was 40 + degrees outside almost everyone was required to buy socks from the café to enter as we were not wearing any! 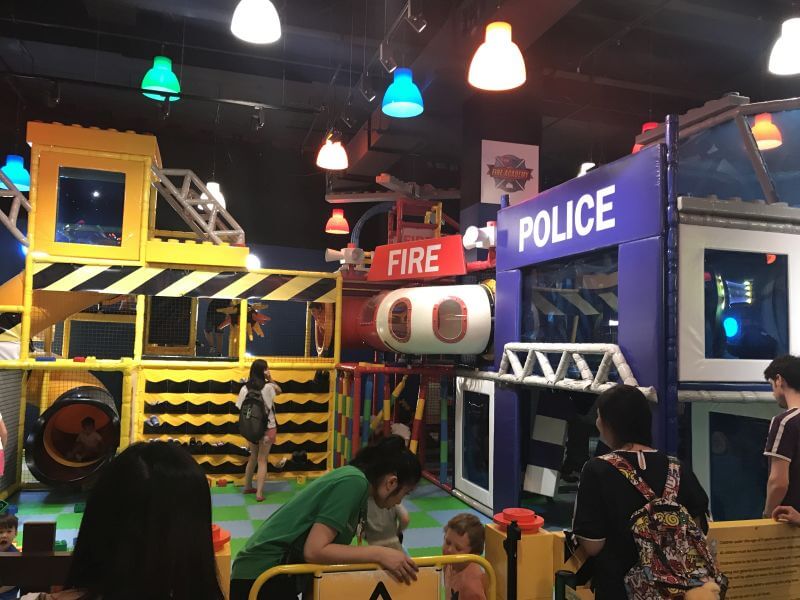 We didn’t eat at the café but there was your standard food items such as hot dogs, nachos, sandwiches, hot and cold drinks, etc. It is noted that you are not allowed to bring in your own food but I am not sure how they police this when it was as busy as it was.

This was my favourite part of the Legoland Discovery Centre. There were huge queues when we arrived with people lining up for over half an hour. We watched to see how many people went into each session and knew that we didn’t have to line up until they opened the doors! The movie is shown multiple times a day. You are handed your glasses when you walk in and there is a box to leave them in at the end. The movie itself is only 12-15 minutes long but being 4D that means that it is a 3D movie (which all the kids thought was amazing with most of them jumping out of their seats trying to touch everything) but you also had smoke and rain drops! A cool experience.

All ready for the 3D movie experience

Other things to note

Absolutely loved the bathrooms. Kids sized toilets, a lowered sink and step together with the characters on the walls and the music was a great touch!

How long do you need?

I think between 2-3 hours would be enough to try everything there is on offer.

I would like to visit again but this time not on a weekend and not over the school holidays. I think it would be a really different experience without the crowds.

Have you visited the Legoland Discovery Centre before? When did you go? Was it busy? Would you recommend us to go again when it wasn’t as busy?