Our review of the Mahagedara Wellness Retreat in Sigiriya

Our review of the Mahagedara Wellness Retreat in Sigiriya

Before we arrived I was very excited about our stay at the Mahagedara Wellness Retreat in Sigiriya. There is no shortage of accommodation around Sigiriya. It is a tourist hotspot (although in saying that, many tour buses are only in town for the morning, before moving on).  I picked Mahagedara Retreat as it had a swimming pool (which not many places do) and it just sounded a little different. We really don’t like staying at big mass-produced type tourist places and love to support the smaller operators. Here is our Mahagedara Wellness Retreat Sigiriya review.

In saying that, this was the first place we have checked out of early eek! We were really disappointed and I was wondering at one stage if we were actually at the correct accommodation.

Mahagedara Wellness Retreat is set about 20 minutes through Sigiriya (approximately 7km). Just keep swimming as Dory would say. Just keep driving. The directions are correct and even though the road turns to dust and you see huge elephant footprints in the dust (oh my goodness, how awesome) just keep going.

We were met at the gate and were taken on a walk back up the road and then through the jungle with no explanation of where we were going and what we were doing. It was all rather odd and we were quite hot and bothered.

After walking along another path we arrived at the reception area and were met by our driver who had carried our bags for us.

There was indeed some confusion from the staff at reception as to our booking. He wasn’t sure if we had booked via booking.com or even who our booking name was under (alarm bells started going). We had actually booked for 3 nights but when they eventually found our booking it was only confirmed for two nights.

We decided at this point not to say anything as we weren’t comfortable and we would play the stay by ear.

I had email communications the day before we checked in with the owner who told us our room was already waiting for us and we would be able to check-in as soon as we arrived. Although we when arrived we were told there would be a slight delay as the room wasn’t ready due to a late checkout….hmmmm.

I was under the impression that we had booked a family room (as per emails) but we were told on check out when we queried the room that it was only a double room.

I knew that the retreat was a little distance from town but we felt a little uncomfortable being so far from town with the kids. This is absolutely no fault of the retreat. It is just something to be aware of.

Once our room was ready we walked through the jungle along the dirt paths. It was an amazing setting. We really did feel like we were part of the jungle. This I have absolutely no problem with! Although, along our walk to our room we were not told anything about the property, we weren’t told where things were located (i.e. the pool, restaurant or anything about the spa services).

Our bags were put in our room for us but there was nowhere to store them apart from the floor (no luggage shelf or anything similar).  We were then told that dinner would be served at 700pm in the restaurant and that someone would come and escort us from our room to the restaurant. I queried the time as 700pm is far too late for the kids to eat. Adventure travelling with kids means they are tired early. This was met with confusion but was told they would try and make it earlier and would come and get us when they were ready. We waited till about 645pm and then decided to walk up to the restaurant as it was getting so late. Only to find the other groups already there and had started eating! Why oh why were we not told to come earlier when we were the ones who asked if it was possible for dinner to be earlier?

Dinner was buffet style with some limited options. The kids did struggle a little (and they are not terrible eaters) but there was a nice selection of vegetable dishes and jelly and ice cream for dessert.

Breakfast was also a traditional breakfast which was tasty but limited.

I love the idea of the concrete style rooms (jungle huts) but it would have been nice to have windows that open with fly screens. Otherwise, we just were just sat in our “box” with no idea what it was like outside.

The room was set up with one double bed and a single bed. We have no issues sharing beds but given I thought we had booked a family room I was surprised that there were only the 2 beds. The beds were also made up as 3 x singles. This is not ideal for a family of 4. We had to untuck the bedsheets so we could fit in!

There was no information offered when we checked in (or in the room) on the retreat. No wifi information, we were not told about any of the spa services (I was in need of a massage!).

We weren’t shown around i.e. where the restaurant was, we could see the pool obviously (we used some towels we found at the pool. No idea if they had been left there for us to use or not).  The pool also stained our bathers brown which we hadn’t come across anywhere else in Sri Lanka. 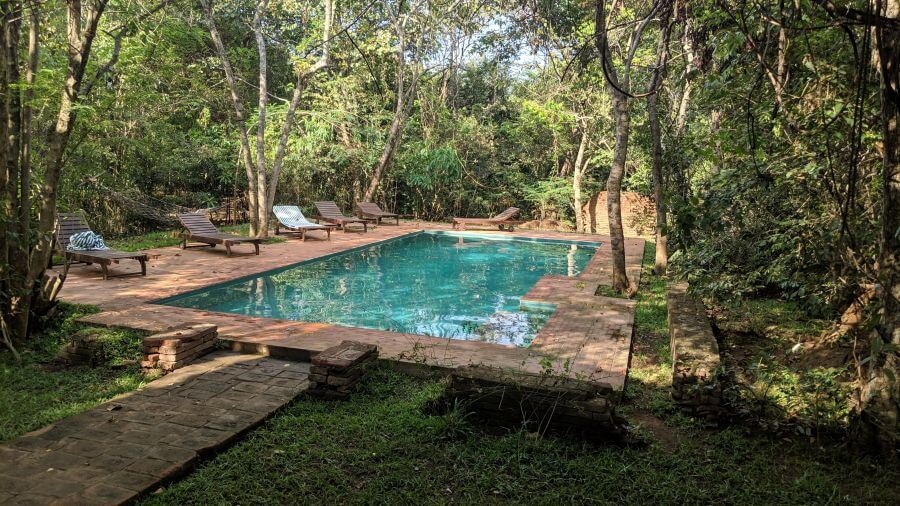 Gorgeous jungle setting for the pool

We were not told about whether the water was ok for drinking until we asked. Then we were told about the jug provided on the table. But there were only 2 cups (and 4 of us staying) – we left the jug outside to be re-filled (as this is what we had been told to do) but it never was. 1 jug didn’t go very far between a family of 4. We did fill our bottles up during dinner and breakfast but it was quite strange that the jug sat empty outside our room for the whole time.

The bathroom was really interesting and could have been a really nice room apart from the fact there were only 3 towels for the 4 of us. There were 2 jars in the shower, cute little containers but we couldn’t get anything out of them. I tried to stick my little finger into the top (the only finger that would fit!!). I think there was ‘body lotion’ on the shower shelf (which is for after your shower not during!) but there was no container of shampoo. It was a little strange.

The bathroom sink and mirror were also dirty. It looked like it hadn’t been used or cleaned for some time.

There was no bin in the room (main room or bathroom).

There was no mosquito candle (just an empty holder).

After dinner, we came back inside and noticed that we had so many ants in our room. We love the outdoors and don’t mind some ants but we had ants in our bed. This is unacceptable. Ross went for a walk in the dark to find a staff member. They came in and pulled back the sheets, brushed them off and moved the beds away from the wall and then said goodnight and walked out. This wasn’t acceptable! No apologies, no making sure the beds were clean and re-made etc!! No offer to change rooms. 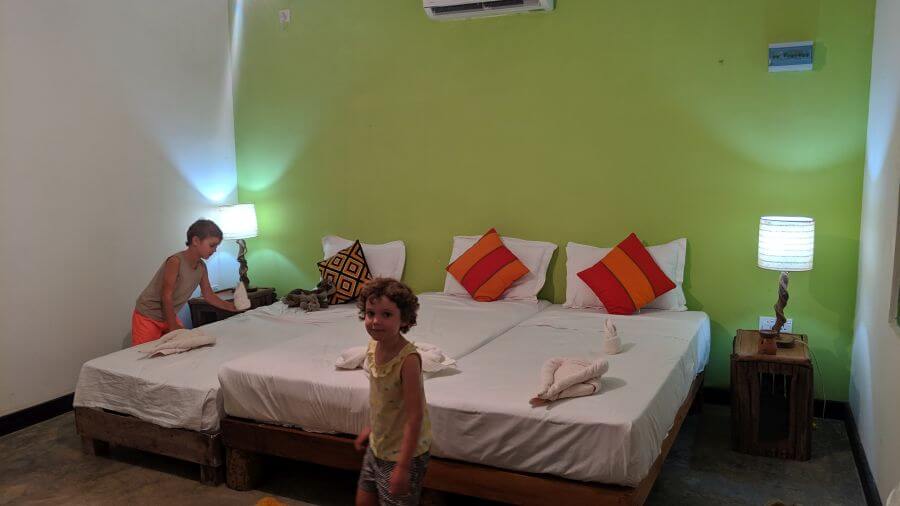 Mahagedara Wellness Retreat, Sigiriya receives positive reviews on Trip Advisor so I was surprised we had so many issues. It really did seem like we were at a completely different property.

Because of these issues, Ross and I jumped onto booking.com and booked another property for the next two nights. We booked Flower Garden Eco-Village which was a larger property and not the style I was originally hoping but it was clean, close to town and had a decent swimming pool.

We checked out of Mahagedara Wellness Retreat straight after breakfast and dropped our bags at the Flower Garden Eco Village and then headed straight to Sigiriya.

Have you ever stayed somewhere you were not comfortable with? Did you stick it out or check out?? I also didn’t love our stay at the  Canopus Retreat in the Maldives. But we stuck it out there.

What to read more on our Sri Lankan adventures? Check out our itinerary here.

Keep in touch via email here if you like. We don’t send out many, but it’s a really nice way to keep in touch.

** This article may contain affiliate links. This means that if you make a purchase after clicking on the link, I may receive a small commission at no extra cost to you.