We learnt all about how the island was formed and is continually changing through our caving tour with Kumuka Tours and were very excited with the prospect of seeing lava from the air with Blue Hawaiian Helicopters.

A helicopter tour is one of the best ways to see the island, especially if you are visiting The Big Island with kids, and want to show them lava from the air! 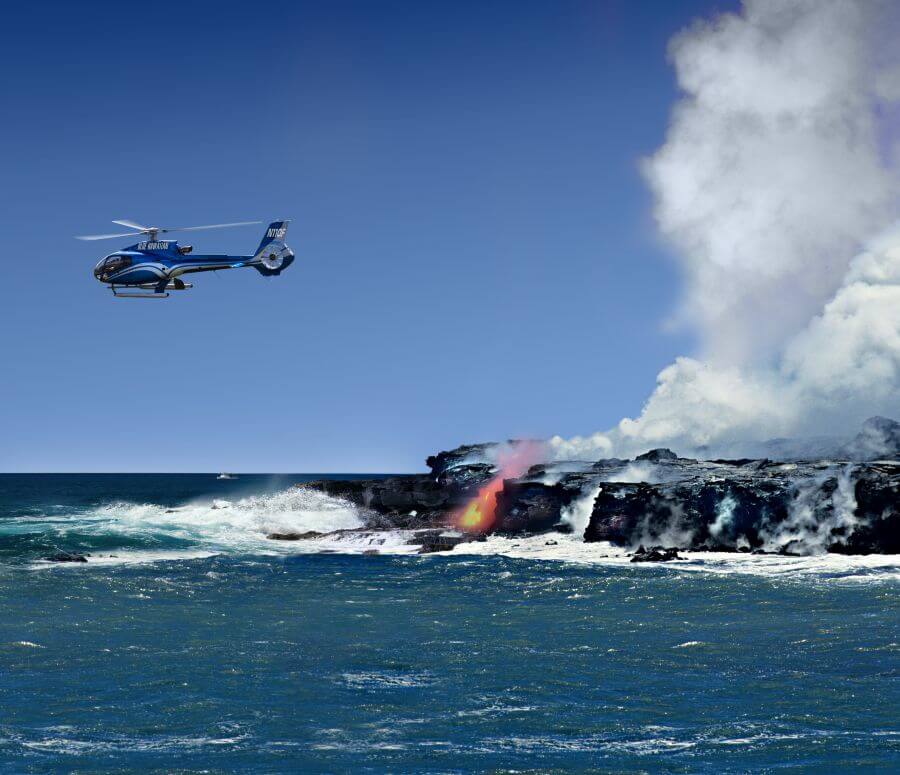 A helicopter flight for lava viewing is worth the cost!

To be honest, when planning this trip before Kilauea erupted, the helicopter flight was on my tentative list of things to do. But, after the eruption and the acres and acres of devastation, lava flowing into the sea and the river of lava shooting out of fissure number 8 it went straight to the top of our things to do on The Big Island with kids.

Yes, I was nervous. So nervous in fact that I contacted Blue Hawaiian with so many questions such as ‘what happens in an emergency’? ‘what happens if the pilot has a heart attack’? etc etc. Totally unfounded worries but worries nevertheless. I am sure they have heard them all before and came back to me with enough data and safety information to settle my nerves!

Blue Hawaiian Helicopters operate out of the Hilo International Airport. Parking is easy on site and as the airport is small it is very easy to find the check in counter. 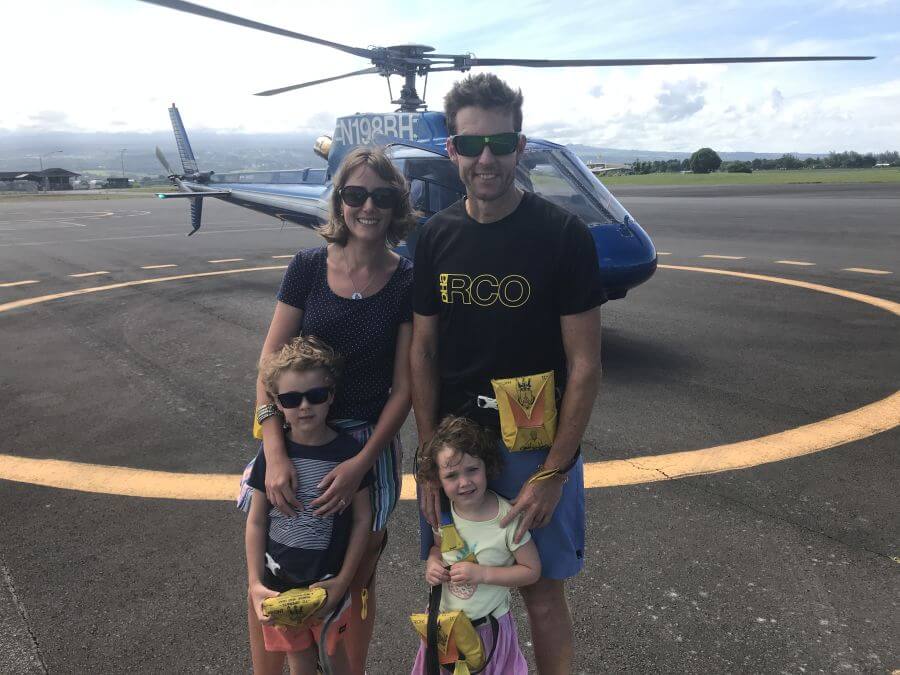 Each person is (discreetly) weighed in at check in and seating is arranged based on this. I was in the middle in the front next to Steve, our pilot, with Ned on the other side of me. Olive and Ross were in the back with another couple (but they didn’t feel too squashed).

There were also two different types of helicopters we could have booked.  The more expensive option had more expansive viewing windows and what looked like comfortable seats. We went with the cheaper option and we were more than happy with our choice. The helicopters are temperature controlled so there was no need to wear anything specifically, dark colours are recommended to minimise the window glare and reflections (so many of my photo’s have my bright shoes reflected in the window!).

At the time we were on the Big Island there were various tours you could book including over the lava and also up over the valley in the north.

We choose the lava tour as this is what we came to see. Our pilot, Steve, said that he used to fly 4 days a week. Blue Hawaiian helicopters were currently flying 7 days a week, 9 flights a day with all 4 helicopters! Crazy, each helicopter could fit 6 passengers. That’s a lot of people interested in seeing the lava flow!

Steve was in two minds re Kilauea. On one hand he was super excited, having lived on the island for a while he and many other people were super excited with what was happening. This is something that some people had been waiting a whole life time to experience. On the other hand, he was a big funny about it all, as he personally knows people who lost everything. How do you feel about that? Excited, but completely devastated at the same time. 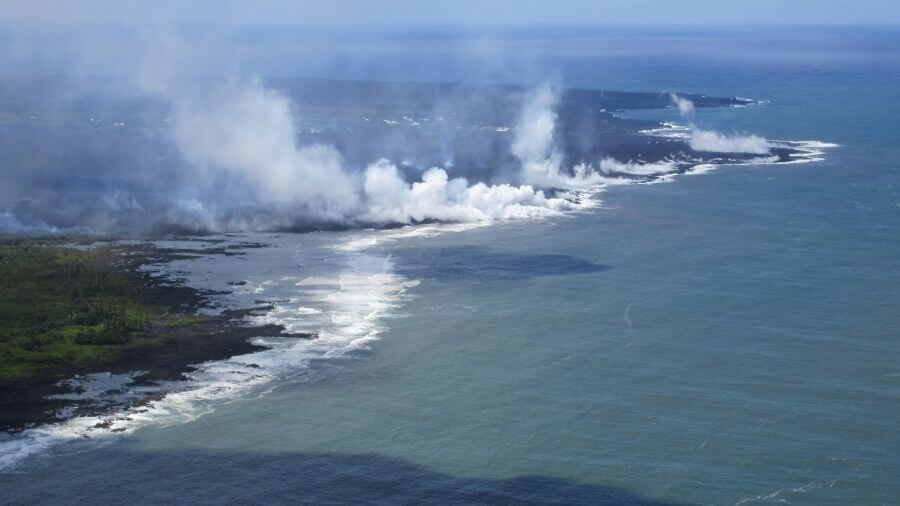 Devastation all along the coast

The ride was smooth and at no time did any of us feel motion sick. It was actually hard to judge how quickly we were flying. We went through the clouds at one stage and as they parted we veered down and Ned grabbed on to me,  you could actually feel the movement and the speed.

The funniest thing that both Ross and I did was take video when we were flying over the waterfalls. The pilot was playing music from Jurassic Park and it was just perfect. We thought it would make good video. Hmmmm, the sound was coming through the headphones only haha! So our video may have looked great but the only noise was the engine of the helicopter!!! Silly! 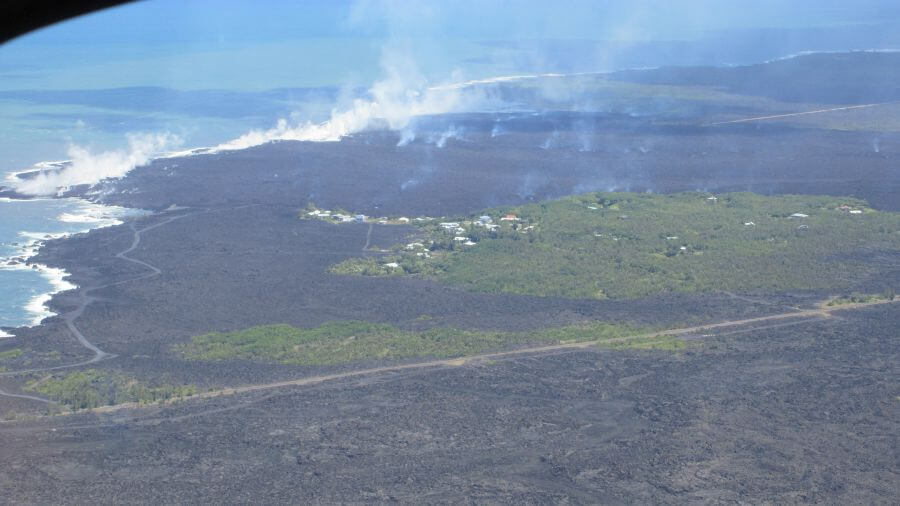 Heading towards the coast

Once in a lifetime experience

Yes, if you are coming to The Big Island of Hawaii with kids then a helicopter flight with Blue Hawaiian Helicopters is definitely a once in a lifetime opportunity and I would highly recommend.

This was perfect timing for us. Kilauea was spewing lava and lava rivers were flowing into the ocean.  We saw sights that we will probably never see again and what an amazing learning experience for the kids.

Even though we were on the flight with another couple, it felt like a private tour. You are all kitted up with headphones and a ‘microphone’ buzzer to use if you wanted to speak. Every time the pilot spoke it felt like he was talking only to you.

Helicopter tours are pricey, there is no doubt about that. Blue Hawaiian started at around $259 per person for a 40-50 minute tour. No discount for kids.

So, yes, the family trip was wickedly expensive. Did we think it was worth it? You bet we did! Even Olive, who fell asleep still says it was one of her favourite activities!! 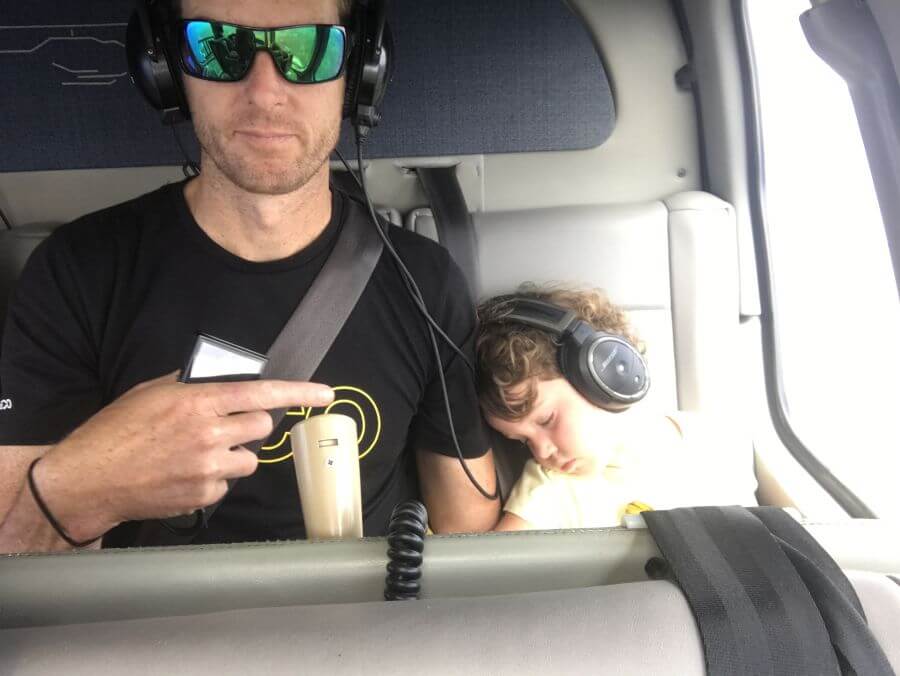 What was your favourite part of Hawaii Olive? The helicopter ride she says!!!!!

Thank you Blue Hawaiian for our fantastic tour. We had a ball, learnt heaps and even though Olive fell sleep, the kids still talk about our helicopter flight. Once in a lifetime opportunity ticked off the list!

Sign up to our newsletter here. We don’t bombard you and it is a really nice way to keep in touch x