A review of The Lost Lands – Family Travel Blog

A review of The Lost Lands – Family Travel Blog 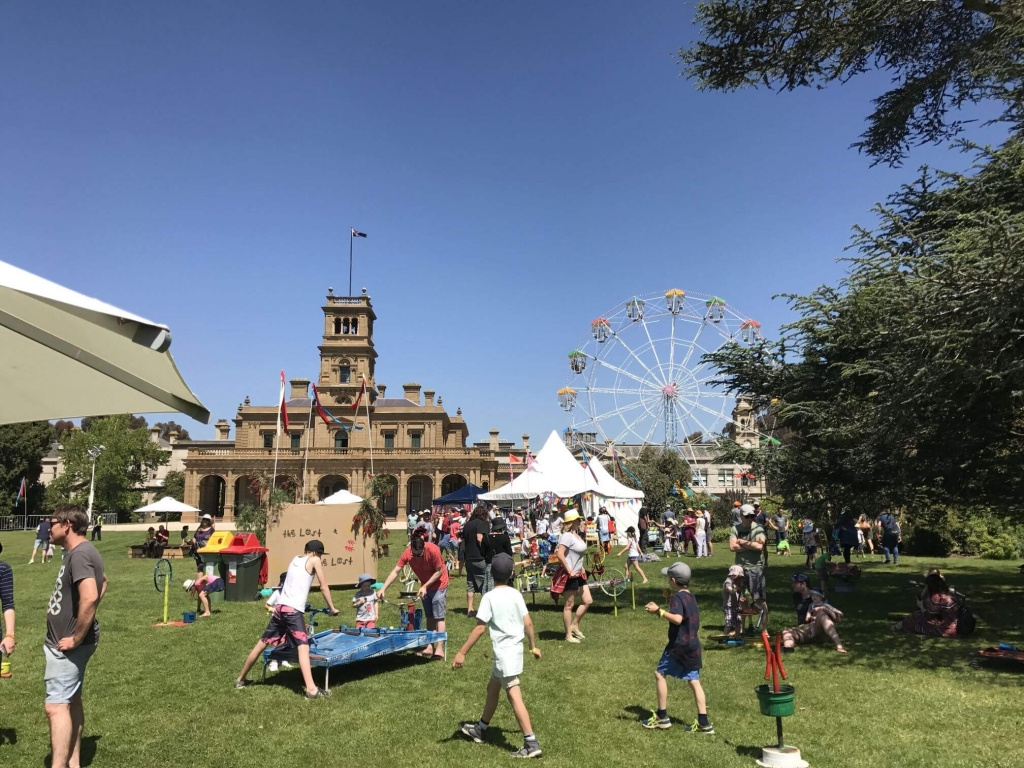 The Lost Lands – on the grounds of the beautiful Werribee Mansion

The Lost Lands was held over the Melbourne Cup weekend in 2016. It was just awesome! We were actually booked to go camping at King Lake that weekend but a couple of weeks prior Parks Victoria called to say they had closed the park due to falling trees. I had spied the details for The Lost Lands Festival but knew we were going to be away – I am so glad that it worked out this way as this festival was one of the most fabulous family events we have been to. We have since taken the kids to the Melbourne Zoo Twilight’s Concert, The Peninsula Picnic and Midnight Oil at Hanging Rock. Without further introduction – here is my review of The Lost Lands Festival. 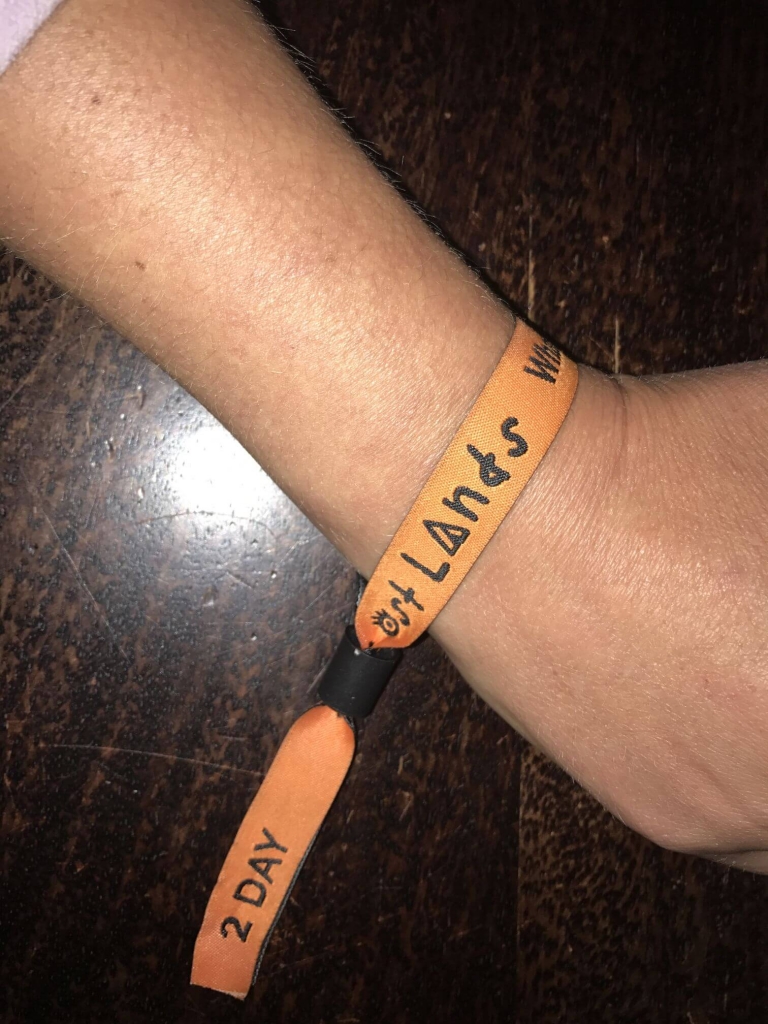 Wrist bands for all at The Lost Lands Festival

There were various options for accommodation from camping (which we did), to glamping (tents already set up with bedding etc) and 5 star accommodation at The Werribee Mansion. It was very flexible having so many different ticketing options – if you really didn’t want to stay you could just come for the day (or both days!).

The Werribee Mansion is an easy 40-minute drive from Melbourne.

The camp grounds opened nice and early at 8am on the Saturday and closed at 1pm on Monday.  We were unsure what the set up would be for tents and vans being the first year the event has run but it came together on the day and the staff seemed organised in directing traffic. If you have friends that you are camping with then you will need to arrive all together as you are not able to save sites next to you or drive around the camp ground looking for your friends. You camp next to your car so you are able to pack as much as you need for the weekend without worrying about having to carry things to your tent site. Vans must stay attached to your cars. 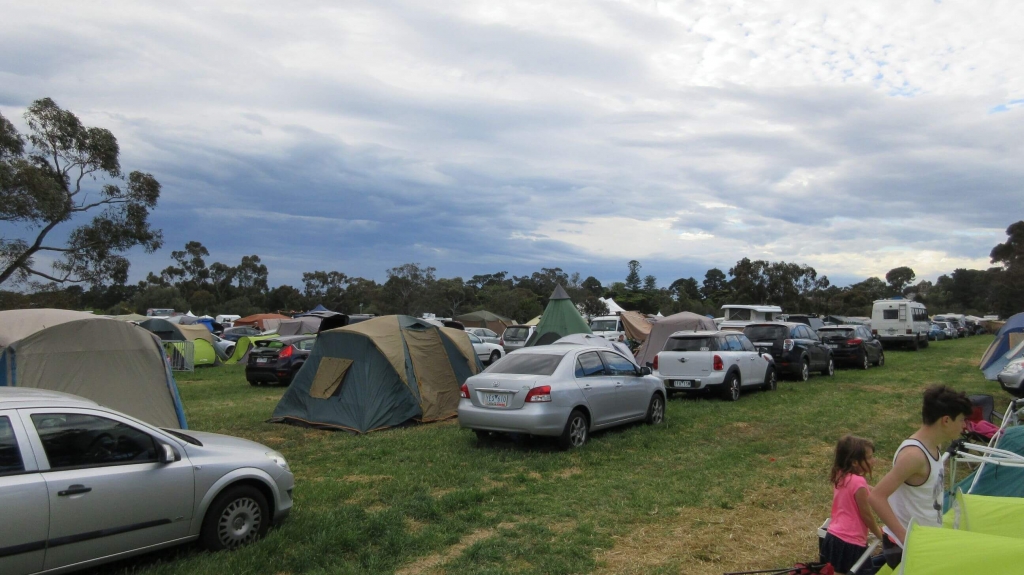 Camping set up at The Lost Lands

There were plenty of toilets and a food van in the camping area including coffee, ice and snacks. Fires are not allowed and neither are gas barbeques.

The event kicked off at lunch time on the Saturday in the sunshine – and after setting up our tent we found a spot for the picnic rug under a big tree and went and played and didn’t really stop until 9pm that night! 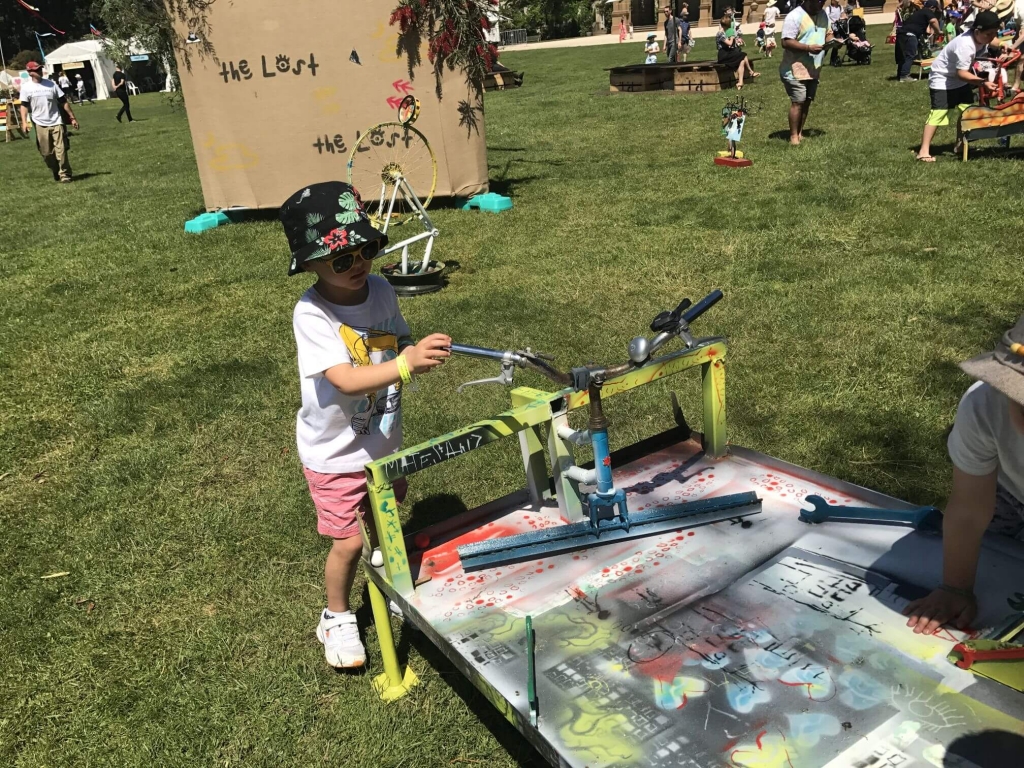 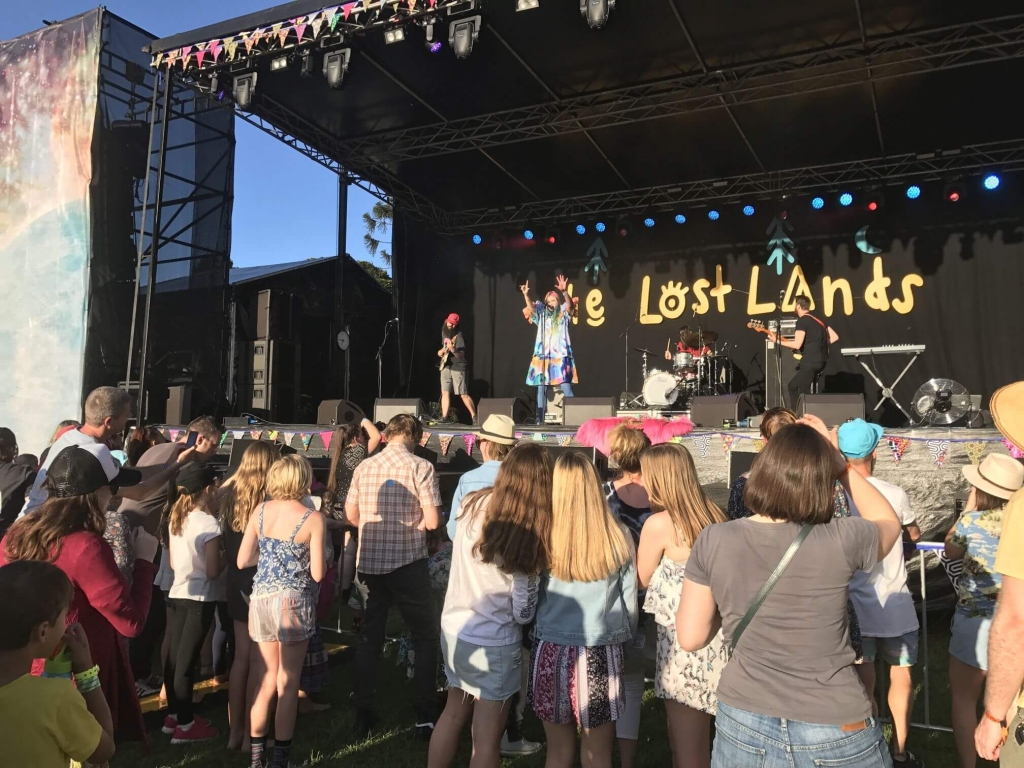 The kids were definitely catered for over the weekend with entertainment including magic shows, Kiki and Pascal in the kids circus tent, Pants Down Circus, Children are Stinky and the Burnt Sausages – ask Ned and Olive to sing the Burnt Sausages song for you – they still remember!

The kids corner had some fantastic old-school games set up, there was a big Ferris wheel, stilt walkers, bubbles, craft area and of course face painting (and the opportunity for the kids to face paint the adults), kids and family yoga, dance classes and laughter yoga.

We had a backpack with our bits and pieces to carry from the car into the event but we passed a few people pulling along what looked to be a 4 wheel drive little trolley. We did some research when we got home and guess what Ross received for Kris Kringle?! 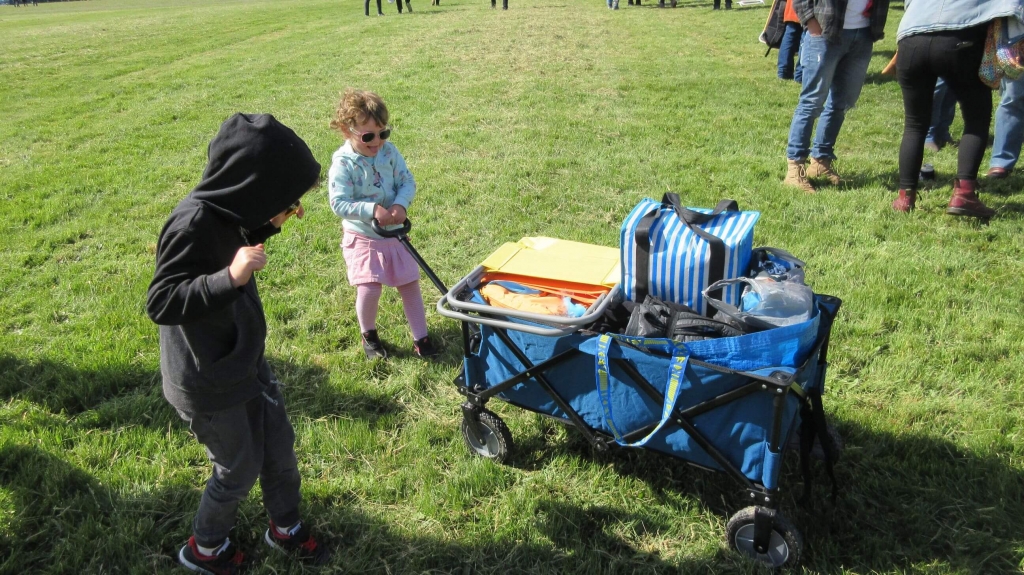 It is a Timber Ridge Fold Away Trolley. This one came from Super Cheap Auto but K-Mart was selling a similar product a couple of months ago. It’s been great and we have used it for a few music events and picnic’s we have been on – we just need to handle to be slightly longer to pull along easier.

You were allowed to take all your picnic food into the festival, so we had lots of different picnic food to cover us for both days including sausage rolls, cheese and bickies, cold meats, popcorn and plenty of water. Around the outside of the lawn area were plenty of food options including pizza, potato sticks, dumplings, doughnuts, ice cream and mango slushies and icy poles. You were not allowed to bring alcohol into the festival but there were a couple of bars alongside the food vans. Surprisingly, (which was very nice) there didn’t seem to be many people drinking heavily and it was a really nice happy vibe. 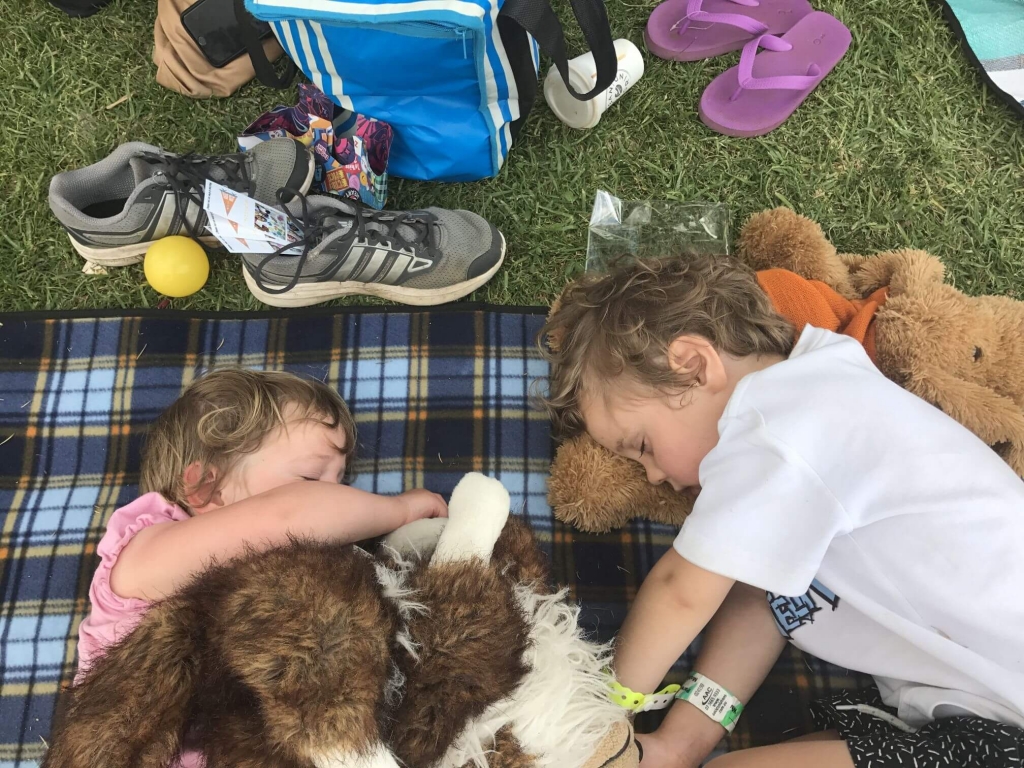 We were planning on staying two nights and visiting Werribee Zoo on the Monday but the weather turned nasty late on the Sunday afternoon with really strong winds – so strong that tents were flying around the camping ground! We didn’t get out unscathed – a couple of our tent poles snapped and our tent ended up with a big unfixable hole in the side – so it made for an expensive weekend when you add in the cost of a brand new tent!

There was a St John’s first aid station set up which we visited after Ned and I ended up with bad hay fever from the wind – along with a lot of other people.

The Lost Lands was a super fun, beautiful family friendly festival. It was the perfect introduction to live music for the kids and now we can’t get enough and we have now taken the kids to the Zoo Twilights, The Peninsula Picnic, A Day on the Green and Midnight Oil at Hanging Rock!! Ross gets loads of enjoyment out of music and he has passed on that love to the kids – it’s not uncommon on the weekend for them to spend an hour in bed choosing songs to listen to and bouncing on the bed to everything from The Cat Empire to Lisa Mitchell to Frenzal Rhomb to Cyndi Lauper! 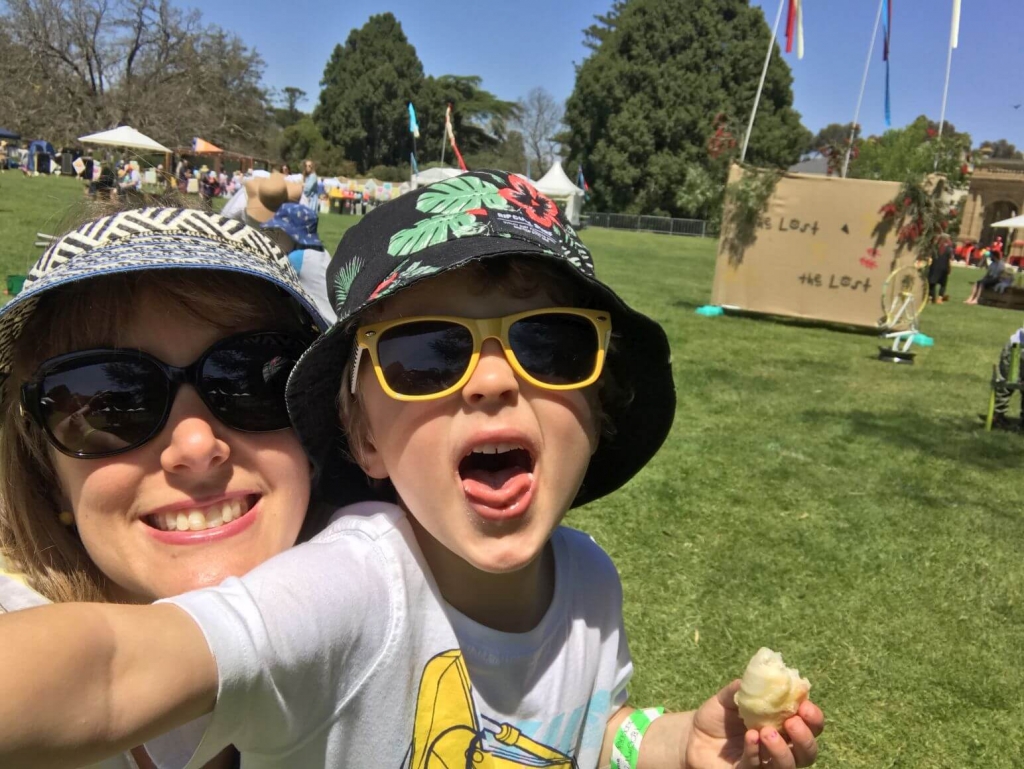 Amber and Ned having fun at The Lost Lands Festival

Top Tips for The Lost Lands

The Lost Lands will be holding the event over the Melbourne Cup Weekend at Werribee Mansion from 2018 onwards. We will be there (can’t wait to see the music line up) – lock it in your diaries and check out their website for all the details. Hope my review of The Lost Lands Festival has made you keen to buy tickets – see you there!

We also love our experience at The Peninsula Picnic and the Zoo Twilights.